Rose “Maria McCarthy” Anding was trapped in a life of addiction, crime, sex, violence, and homelessness for over twenty-five years. Her life turned on an axis of High Heels, Honey Lips, and White Powder. During that time, she was raped, robbed, beaten, shot at, and became involved in the infamous drug scandal of Mayor Marion Barry of Washington, D.C.; she was even jailed. After four marriages and decades acting the harlot, leading men astray with her high heel, honeyed lips, and perfumed sheets, Maria hit rock bottom.

That is when world-weary Maria McCarthy found herself on the doorstep of a spiritual rehab center, and finally met her Savior and was reintroduced to Rose, the woman God created her to be. Once she’d traded her high heels for a Bible, and her cocaine for a relationship with Jesus, only then could she perform the task God made her do. Mere months after completing drug rehabilitation, Rose was counseling and sharing her story with other women who had been leading similar lifestyles to her own. Because Rose met and fell in love with Jesus, this book is her way of telling all that it doesn’t matter who you are or what your addiction is, if you feel helpless and alone, Jesus can set you free–just come and fall in love with Jesus! 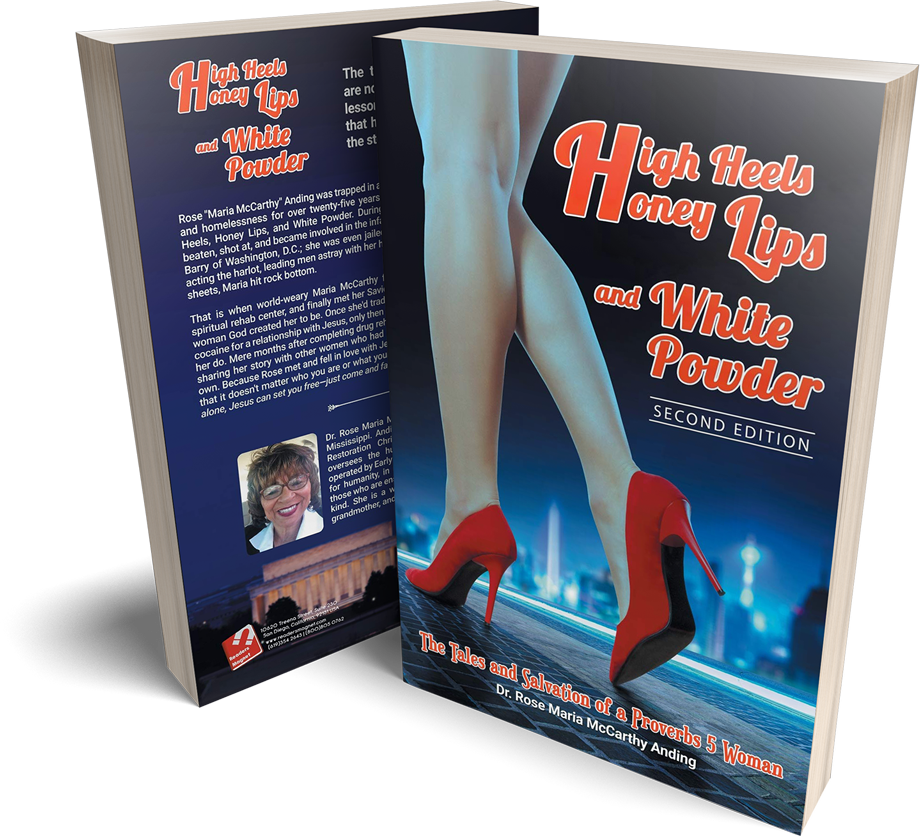 1. “The tragedies of my yesterdays are now the sermons I preach, the lessons I share, and the memories that have caused me to lay down the stones that I used to carry.” BP

2. ” I will continue to flourish like the palm tree, bending when troubles arise. I will grow like the cedar in Lebanon while lifting my arms toward heaven with the strength that comes from God. I am prepared to face the grueling winter while I wait for the promise of my spring.” P120

3. “My yesterdays of high heels, honeyed lips, perfumed sheets, and white powder—and all my worldly desires— are all vanished, and today I can say that falling in love with Jesus is the greatest emotion and the best high I ever experienced! I never knew a passion like the passion I have for my God-given purpose!” P220

4. “When I remembered where I had been and what I have done, I knew that I could never cast another stone.”

5. ” During this downward spiral, I was arrested for drunk driving and went to court for bad checks. I was evicted from my home and business and lived on the street for a period of time. The thought that “things could not be worse” proved to be wrong. In the late ‘80s, I was caught up in one of the nation’s worst political scandals that involved drugs and sex. My name was on the front page of the newspaper and on television news. I was in a league with Marion Barry (MB), mayor of Washington, DC. I was right dead in the middle of it and was forced to leave DC and flee to North Carolina.” P38